Quartzite, Arizona
April 19, 2012
We were on our way to Joshua Tree National Park, by way of the Phoenix Airport. Somehow, I'd decided that it would be faster/cheaper/easier to fly into Phoenix instead of going into LAX. Probably because I hate LAX. So we took a 9p flight out of Denver into Phoenix, with the idea that we'd drive to J-Tree, stopping somewhere in Arizona and camping out.
My mom was at home with the boys; this was to be five days to unwind. Yeeha!
After a ridiculous turn at the rental car counter, which took forever, we were on the road by midnight. A quick stop for some bad fast food and we were on our way.
There is nothing along that stretch of Arizona in the dark. We drove for a couple hours before deciding that enough was enough, then pulled off the road to camp. To get away from the highway, we broke in our rental Ford Fiesta on some bad road littered with glass, and found a clear patch midway between the highway and the hillsides, somewhere just east of Quartzite. It was utter blackness, the sky filled with stars. You could faintly make out the hillsides a short distance away, but other than that, it was too dark to orient in any way.
We awoke to open desert, covered in massive Saguaro, beautiful Silver cholla, Buckhorn cholla, and the ubiquitus prickly pear in bloom. We'd managed to pitch our tent right under one of the giants of the desert - I'd never seen one up close before. We'd also managed to pitch with a batch of dead Buckhorn cholla between us and the car, so I ended up with a whole bunch in my feet.
It was a fantastic place to stop, since it meant our last couple hours drive not only took us through the park, but past the Chuckwalla mountains covered in snow.
Let the journey begin. 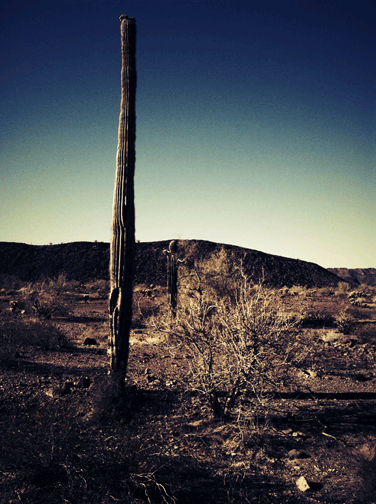 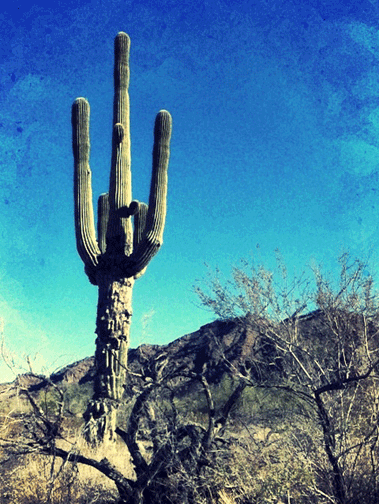 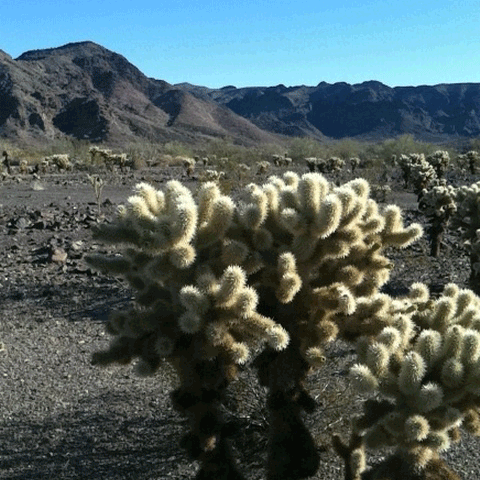